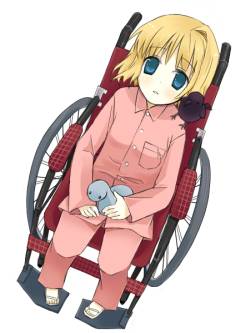 Awww, the poor kid...
Sara Berry was a popular bitch
Hot bod, hot boy, cheer captain, plus she was rich
That girl had everything 'till hiccup and hitch: Julie Jenkins lost her leg in a wreck (am-pu-ta-ted)
The nominations for Prom Royalty came
Our Sara's senior year, and Queen was her claim
'Till gossip stirred the student body would name Julie Jenkins, Queen of the Prom (pi-ty vote)
— "The Ballad of Sara Berry", 35mm: A Musical Exhibition
Advertisement:

An easy way to instantly mark someone as The Woobie is to put them in a wheelchair. Crutches or other similarly visible impediments are common as well, but wheelchairs are the most common. Often, their Woobie status is tied to how they ended up in the thing in the first place.

This trope is NOT reserved for examples involving wheelchairs; any meaningful disability works. The important thing is that the character's Woobie status be directly tied to them suffering from whatever it is (either with respect to how they got that way or how it is affecting their life).