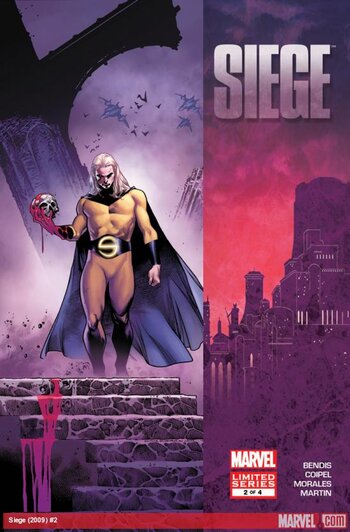 Asgard, which has always been located in Another Dimension, has been recreated in Oklahoma. Loki wants it to return to its own dimension, and convinces Norman Osborn to launch an all-out attack on the city. Norman agrees, he does not like to have a city of gods on U.S. soil. They stage an incident similar to the one that began the Civil War, to get public acceptance for the attack. The president orders to stop it, but Norman goes on anyway... and H.A.M.M.E.R. is outlawed in the process. All the other fugitive heroes team up as well, to defend Asgard from Osborn's forces.

In the end, Osborn is defeated, but the battle left many casualties and the city was destroyed in the process. The heroes that were outlawed since Civil War become legal again, the superhero registration act is repealed, and Norman Osborn is sent to prison.

For the trope, see The Siege.