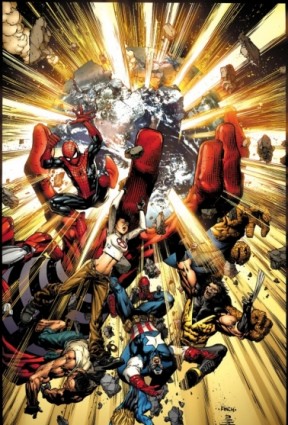 "For what they have done, they must pay the ultimate price!"
— Magneto
Advertisement:

The Ultimate Marvel universe, originally created to appeal to new readers without fear of years of Back Story or Retcon, had begun to stagnate after a decade from its creation. Some series, such as Ultimate X-Men and Ultimate Fantastic Four, had fallen into Seasonal Rot. Marvel tried to change that with a big Crisis Crossover, written by Jeph Loeb. It would be followed by a complete relaunch of the Ultimate line, with new #1 issues.

The Ultimates 3 killed the children of Magneto, Quicksilver and the Scarlet Witch, and left Magneto wanting revenge. For this, he altered the earth's axis with his powers, which caused natural disasters around the world. A flash flood reaches New York, and many heroes are killed by it. Some members of the Brotherhood of Mutants wreak havoc among the survivors, and Magneto kills Charles Xavier himself. The surviving heroes eventually band together and follow Magneto to his floating fortress. After another fight, Magneto is finally killed. Many characters, both heroes and villains, died in the story; either during the flash flood or the subsequent fights.

The series, however, was not followed by a relaunch as initially planned. The ongoing titles were rearranged (Ultimate Fantastic Four and X-Men closed, and new titles were released: Ultimate X, Ultimate Avengers, New Ultimates, etc), but Ultimatum was still canon and the books were set in the aftermath of the destructive flood.