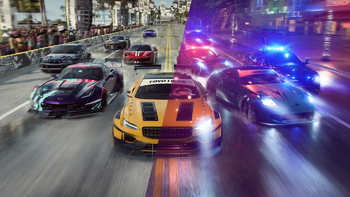 Palm City becomes Empire City at night.
"WHAT A HORRIBLE NIGHT TO HAVE A CURSE."
— Castlevania II: Simon's Quest

Imagine you're shipwrecked somewhere. At first glance it appears bright and cheerful, a pretty normal place. But then sundown comes and it's night, accompanied by a sudden flood of monsters who want to kill you. Apparently in this world all the deadly creatures are nocturnal, and usually also Weakened by the Light and the arrival of the sun.

Very common in Survival Sandbox games — usually you start off at sunrise and have until sundown to gather materials before night comes along with unwelcome visitors.

Most Cassette Futurism films (The '80s version of Cyberpunk) involve street gangs that have control of the cities and mostly come out at night. Mostly.

Most cases of The Night That Never Ends will have at least minor levels of this in play.