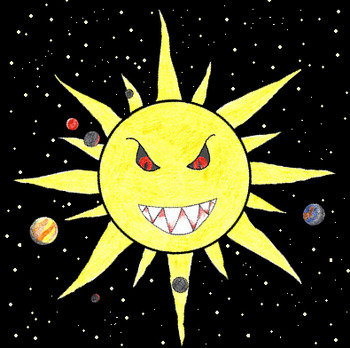 Who would want to be orbiting around that?
You will not go gently. On all mortality's behalf, you will mount a (certainly futile) attack on death itself...
But you are in the heart of a star's power, and your rebellion cannot last more than an instant. Light washes over you. You are no longer permitted to exist. You cease.
— "Rage against the light of dying", Sunless Skies
Advertisement:

Since the Sun is the main provider of life, heat and energy on Earth, it is a symbol of health and light, and is often depicted as a benevolent being.

Sometimes, the Sun is depicted as a sentient, malevolent entity that actively tries to harm the life forms it shines upon. Some works also feature sun-like beings that bear malicious intentions.

Not that this is completely unjustified: while obviously not sentient, the Sun can be dangerous to the people that are exposed to its light. Aside from the visible spectrum, it emits a vast array of electromagnetic radiation that can be exceedingly dangerous, most notably ultraviolet light, which can cause various skin cancers (including the deadly melanoma), cataracts, sunburns and sunstroke (which can be lethal), among others. Earth is only liveable because its own magnetic field shields us from most of the Sun's radiation. It's only logical to see/portray it as an evil entity in some works.

Sub-Trope of Sentient Stars and Light Is Not Good. Compare The Power of the Sun. Can overlap with Evil Is Burning Hot and The Face of the Sun, usually with an angry, menacing expression for the latter.

the sun is a deadly lazer

Every dawn is a great battle

Every dawn is a great battle