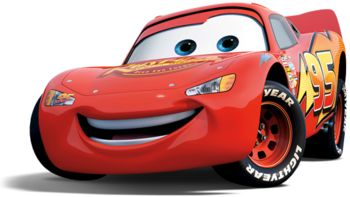 Just don't question how this could possibly work in any other universe, and you'll have a fun time.
Advertisement:

Ever since their invention, people have always been enamored with vehicles. So just like animals, they've been anthropomorphized. There are sentient and sapient cars, buses, trucks, RVs (motorhomes), trams, ATVs, trains (steam-powered, diesel-powered, monorail, or light rail), train cars, airplanes, helicopters, boats, ships, spaceships, etc. Name any vehicle, someone has probably made a character based on one. Some of them maintain a Masquerade, some do not, and some live in a world of their own without humans.

This trope does not cover vehicles that happen to have AIs when those AIs are treated as separate entities that are not integrated into the vehicle itself. Also, with the exception of Living Ships, they have to be inorganic (in other words, not a "living" being). May be justified if the vehicle has a true robot form and/or has its own AI.

Airplanes, Helicopters, and Other Aircraft:

Boats, Ships, Submarines and other Seacraft:

It's always important to find out what really happened.

Example of:
An Aesop

It's always important to find out what really happened.