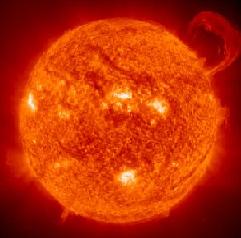 Is it hot in here, or is it just me?
The sun is a mass of incandescent gas
A gigantic nuclear furnace, Where hydrogen is built into helium
At a temperature of millions of degrees
The sun is hot, the sun is not, a place where we can live,
But here on Earth there'd be no life, Without the light it gives.
Later, upon having done their homework again:
The sun is a miasma of incandescent plasma
The sun's not simply made out of gas, no, no, no
The sun is a quagmire. It's not made of fire.
Forget what you've been told in the past.
(Plasma!) Electrons are free. (Plasma!) A fourth state of matter.
Not gas, not liquid, not solid, Ooh!
...
(Plasma!) Forget that song. (Plasma!) They got it wrong.
That thesis has been rendered invalid.
— They Might Be Giants
Advertisement:

This is about the other Helios. And tropes about it.

Okay, okay, enough beating around the bush. This index is for tropes regarding The Sun.

It chases away the night. It has been the focus of religious worship on every continent. It provides nearly every living thing on Earth with the energy it needs to survive. It is responsible for the very existence of our planet. It is Sol, The Sun, our mother star. And, naturally, it features prominently in the stories told by virtually every culture on earth. Vampires fear it. Heroes ride into it (and occasionally blow it up). When killing something with fire simply isn't enough, what do you do? Hurl It into the Sun!

Compare This Index Earth, This Index Is on Fire, Index on the Moon and Stellar Index.

Hey, y'know something? I guess you could call this index page a "Solar Nexus", huh?