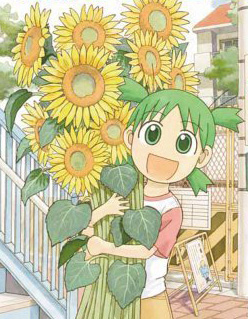 For when the sun itself just isn't enough to brighten the day.
"As I'm looking straight at the piercing sky, I can feel your presence,
And I hold out my hands at the warm sunlight of that sunflower of happiness-looking sun.
I was born here to meet you,
Even without saying anything, just being able to be by your side is enough.
I'm your flower, I want to shine for you, just gaze at me,
I want to shine with the strength of the mid-summer flower,
You're my sunshine, you're my every happiness, is this destiny?
I love you, who's like a dazzling sun!"
— Hikari Hinomoto in her Image Song "Happy! Sparky!", Tokimeki Memorial 2
Advertisement:

A flower native to North America that's been transported all over the world where it readily grows in abundance, the sunflower holds a powerful cultural image. Being a beautiful and colorful flower that needs lots of sunlight to be at its brightest, it symbolizes energy and happiness. An endless field of sunflowers is quite a breathtaking view to hold. Sunflower seeds are also highly nutritious, and thus are attractive to small finch-type birds, as well as humans. Even sunflower oil is bright gold, and has its own nutritious uses.

The sunflower blossom was an emblem of the "aesthetic" movement of the 19th century; it came to symbolize connections between the sun, fire, and warmth — both physical and metaphorical. It was a popular motif because its bold color and simple shape could be stylized, much like the chrysanthemum of Japanese art, which had a strong influence on the movement.

In official sources, the sunflower has a meaning of adoration and constancy, since the sunflower always turns towards the sun throughout the day; in common knowledge and fiction, people associated with sunflowers are more often than not seen as cheerful, energetic, and happy-go-lucky people who brighten up everybody and everything else around them.

In a work of fiction that represent characters with a symbolic flower, the sunflower will very likely be attributed to the Genki Girl.