Blinded by the Sun 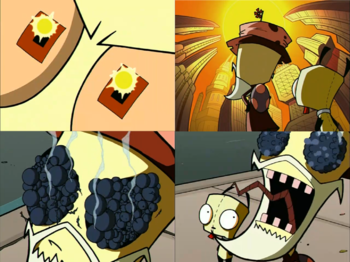 The sun is extremely hot and bright. No doubt you were told to never look directly at it. Doing so will do some serious damage to your eyes.

However, some characters are dumb enough to ignore that measure of safety and look at the sun anyway. Maybe they don't consider the consequences, or they don't think it is dangerous at all.

Whatever the case, they decide to stare at the burning bright sun, and now they are blind... or at the very least writhing in agony at their eyes hurting.

Will obviously cause Eye Scream, and so, if this doesn't happen from looking at the sun, it's Harmless Luminescence. Subtrope of Can't See a Damn Thing. Compare Blinding Camera Flash. If the sun or other bright lights are used to blind an opponent for a combative advantage, that's Blinded by the Light.