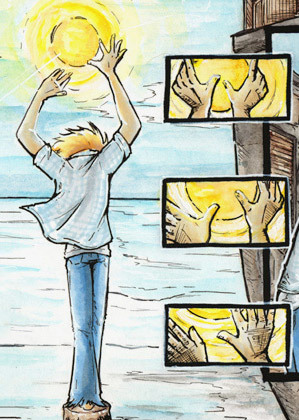 A visual motif wherein a character who is about to attempt some superhuman feat reaches out towards the sun (or the moon, Earth, etc.) with their hand, as if to grasp it. The camera then switches to his point of view as the hand "grabs" the selected celestial body via Depth Deception. This symbolizes the human will to seize things that are just too big for them.

Additionally, it is the source of the expressions "reach for the stars", "shoot for the moon" and "touch the sky."

Not to be confused with cases where characters literally grasp the sun.

Compare Got the Whole World in My Hand, Milking the Giant Cow and "Pan Up to the Sky" Ending.