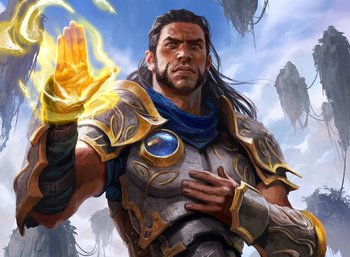 "I will keep watch."
"I swear with words not yet written, on gods not yet born... I will never run away again."
— Kin, Goblins
Advertisement:

Most protagonists are depicted as imperfect; though heroic, they aren't flawless paragons of perfection and will have some minor shortcomings to help the audience identify with them better. SuperBob can selflessly save the world on a daily basis, but mild-mannered Bob Trope will regularly leave the refrigerator door open.

Even so, some characters make a Heroic Vow: a commitment or standard that they will not cross for whatever reason. Perhaps it's a promise to a dear one, a sense of pride, a personal Moral Event Horizon, or just because the hero is a Nice Guy. If a villain takes vows, it's usually because Even Evil Has Standards.

Key to the Heroic Vow is that it is a commitment the character keeps because he willingly wants to. There are no talismans or fail-safes preventing the breaking of the vow, nor are they needed — the character's willpower and resolve are the only requirements.

Note that the Heroic Vow doesn't necessarily have to be spoken (or written); a hero's behavior enforced with sheer personal willpower counts. If the vow is spoken/written, it may become a Badass Creed.

Some Heroic Vows are so commonplace, they have their own tropes:

Often an application of Heroic Spirit, and popular with a Knight in Sour Armor. When done well, can lead to Moments of Awesome. When handled poorly, can result in Lawful Stupid or Stupid Good. If a hero becomes obsessed with enforcing his Heroic Vow, he may end up becoming The Fettered. If unlucky, they'll be forced to make their vow a Frequently-Broken Unbreakable Vow when circumstances force them to break it.

A convenient Narrative Device to drive a story in a direction it wouldn't normally go. Sometimes used to deliver An Aesop on morality. If the character is forced into breaking the Heroic Vow, expect a Heroic BSoD. If his determination to keep his vow starts to slip, it can be a prelude to Jumping Off the Slippery Slope.

Compare and contrast with Empty Promise, Rash Promise, I Gave My Word, Pinky Swear, and Exact Words. When someone has broken this vow so thoroughly they become ostracised they're The Oath-Breaker. If the oath is strong enough to prevent even mind control from forcing them to break it, it's an Intrinsic Vow.