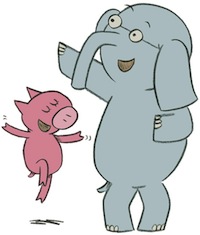 Gerald is careful. Piggie is not.
Piggie cannot help smiling. Gerald can.
Gerald worries so that Piggie does not have to.
Gerald and Piggie are best friends.
Advertisement:

Elephant & Piggie is a series of children's books for early readers. They are written and drawn by Mo Willems (best known for Don't Let the Pigeon Drive the Bus! and the Cartoon Network series Sheep in the Big City), and debuted in 2007.

The books center on two Funny Animal friends, Gerald the elephant and Piggie the pig. Each book tends to center on everyday activities, often addressing issues of friendship along the way. While Gerald is a down-to-earth realist, Piggie is an eternal optimist, and the difference between the two personalities often drives the dialog.

The books have won the Geisel Medal in 2008 and 2009, and have been listed twice on Time magazine's Top 10 Children's Books of the Year.

The popularity of the series has resulted in a traveling stage production beginning in 2013: "We Are in a Play!

" The play is based on material from several of the books.

Although the series apparently ended in 2016 with The Thank You Book, Elephant & Piggie have gone on to appear in a series titled Elephant and Piggie Like Reading! These new titles are illustrated by Willems but authored by others. The idea is that the Elephant & Piggie characters are presented as Book Ends, appearing at the beginning to say how great the story is going to be, and then gushing about the story after the ending.

Elephant and Piggie books with their own page:

Other books in the series demonstrate the following tropes: