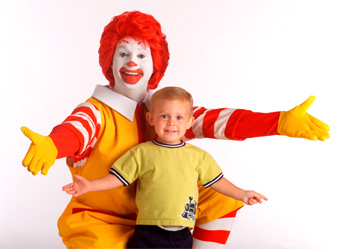 It's almost ironic, since he's largely among the Last of His Kind.
"When you want to scream, put away that frown
And never be scared of a clown!
Laugh on, laugh on, laugh on and on and on,
You'll never laugh alone!"
— Birthday Clown, Animaniacs, "Clown and Out"
Advertisement:

The past 30 years or so have seen a surge in the popularity of evil, Joker-style Monster Clowns who deliberately and very effectively invert everything clowns were traditionally assumed to represent — that is, making people laugh, especially children. However, there was a time when clowns were treated in the popular media as sympathetic figures of whimsy and silly fun. They filled the same niche that animated cartoon characters later would, and were just as beloved for it. Outside of their early habitats like rodeos and circuses, pretty much the only clown left in the public eye who is still permitted to act at all clown-like is Ronald McDonald. (And now he's been phased out of the advertising.) But in days past...

This type of clown is a good guy in every sense of the word. They are devoted to clowning, and absolutely love hearing people laugh, especially children. If the clown has magic powers, if they aren't using them to fight evil, then they will most likely be seen using magic to put on a wonderful show for their audience.

Unfortunately, Non-Ironic Clowns aren't always loved as much as they love others. In works featuring good clowns, there will usually be at least one person who is afraid of or distrusts said clown. Despite this, the Non-Ironic Clown keeps on going, whether the dissenter changes their mind or not.

For clarification, it should be noted that a degree of irony is intrinsic to most clown performances, and indeed to humor in general. The traditional "tears" painted on a clown's cheeks are there to show that he is laughing on the outside but may be crying on the inside, an acknowledgment by the performer that most humor contains at least some element of laughing at another's pain. This is most played up in old-school, down-on-their-luck "hobo" clowns like Emmett Kelly Jr., though the ultimate artistic expression of the tragic clown concept is probably the title aria in the opera Pagliacci. The "Non-Ironic" in the trope's name simply refers to the clowns listed here not being evil or deliberately frightening. The fact that a clown even has to be identified as "non-ironic" is pretty telling.

The Court Jester is one of the oldest forms of this trope. A more modern version would be the Dreaded Kids' Party Entertainer Job, where clowns who entertain at kids' parties are treated terribly regardless of how nice they are.

The early years of Claire Redfield.

The early years of Claire Redfield.