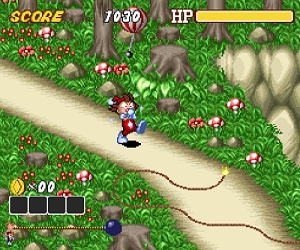 A game developed by Kemco in 1994 for the SNES. The game stars Kid Klown who appeared as a different version of himself in an earlier NES game called Kid Klown In Night Mayor World.

The plot of the game involves Kid Klown trying to rescue Princess Honey of Klown Planet from the evil Space Pirate Black Jack. Black Jack sets up a very large bomb with an overly long fuse at the end of the level that Kid Klown must race against while avoiding other crazy traps and obstacles that will slow him down in humorous ways. At the same time Kid Klown must collect four card symbols (Spade, Heart, Diamond, Club) from balloons in order to advance to the next level. The game has a colorful and zany look. The game received a sequel, Crazy Chase 2 released for the Playstation in 1996, but only in Japan, and a Game Boy Advance remake in 2002.