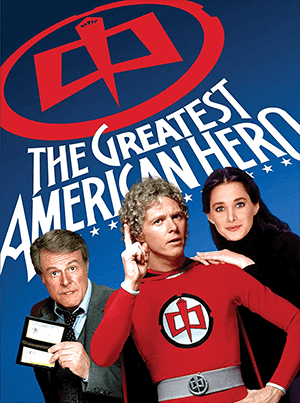 Bill (Robert Culp), Ralph (William Katt), and Pam (Connie Sellecca)
"Believe it or not, I'm walkin' on air
I never thought I could feel so free-ee-ee...
Flyin' away on a wing and a prayer
Who could it be?
Believe it or not, it's just me."
Advertisement:

Created by Stephen J. Cannell, the show first aired in 1981 on ABC and was both a comedy and a drama. Ralph Hinkleynote briefly "Ralph Hanley" in the wake of John Hinckley's assassination attempt on then-President Ronald Reagan, played by William Katt, is a teacher to a class full of delinquents. He is a good, moral man, and because of this, aliens give him a special "Superman suit" that gives him special powers — but only works for him. Unfortunately, he almost immediately loses the instruction manual and must discover its powers by trial and error. He is paired up with FBI agent Bill Maxwell (Robert Culp), whose determination to fully exploit Ralph's new abilities keeps them both busy.

The suit gives Hinkley the power of strength, flight, invisibility, flames, telekinesis, vision of events without being there, protection from bullets and fire ... in short, whatever powers are required by the plot. But he doesn't know everything it does at first, and only slowly discovers its abilities. Essentially, the entire series runs on How Do I Shot Web?.

Ralph must balance his new powers and responsibilities with his old ones, which not only include his students, but his girlfriend Pam (Connie Selleca) and his son Kevin.

After building a reasonably good following for its first two seasons on Wednesday nights, the show became a victim of The Friday Night Death Slot when ABC paired it up with a new Cannell show The Quest, finally canceling it with four episodes unaired until syndication.

The show has two legacies:

Various as-yet unsuccessful attempts to revive the show have surfaced over the years. Immediately following its cancellation, a pilot movie entitled The Greatest American Heroine aired on NBC, wherein Ralph has inadvertently angered the original aliens who gifted him the suit due to his heroism making him famous, and must find a successor to appease them; this successor being a young woman who must now master the suit with the aid of Bill, one of the few people allowed by the aliens to remember the events of the previous show. A short-lived comic book series was released in 2008, placing the story into modern-day and adding elements such as the FBI knowing to some degree about Ralph and his supersuit (with Max's hasty story that he's a test pilot of a prototype military weapon). In the 2010s, another Gender Flip version was proposed with Hannah Simone (New Girl) in the lead role, before ABC ultimately passed on it.

The series is currently being rerun on weekend mornings on Heroes & Icons.

Believe it or not, this show provides examples of: