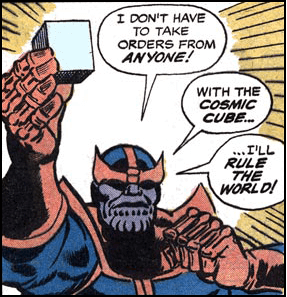 "This is a relic. Some magic is too powerful to sustain so we imbue objects with it... allowing them to take the strain we cannot."
— Karl Mordo, Doctor Strange (2016)
Advertisement:

You know, these people with their superpowers and magic are really annoying. They can summon fire up from nowhere, be in two places at once, even give other people abilities! Why can't you do that?

What you need is an Artifact of Power. Each is an item, tool or device capable of astonishing feats, typically (though not always) independently from any supernatural abilities of their wielder (though they don't necessarily need one), that outstrip anything else that their world can offer. Unlike some types of phlebotinum, Artifacts of Power are not naturally occurring: they are constructed. (The word "artifact" literally means "something made by humans," and contains the same root as "artificial.") They can range from the simplest Magic Staff to the most complex construct and don't even have to be magical either, though what else can anything on that power level be?

To be precise, the thing that separates Artifacts of Power from regular tools is rarity. Modern explosives might do a far better job than a Wand of Fireballs in causing explosion-based havoc; explosives, however, are (relatively) easy to manufacture today, whereas fireball-shooting wands in many settings won't be. If they are, then, though powerful, they in turn aren't artifacts; the Legendary Wand of Angkor Wat, on the other hand, will be one. As a result, Artifacts of Power are frequently either one-of-a-kind, the methods of crafting it lost to the mists of time; made of a substance that is difficult to find; or incredibly, incredibly hard to produce. This rarity, in combination with its might and utility, will often make an Artifact of Power an object of desire for a great many individuals and organisations, both savoury and unsavoury, meaning that a MacGuffin has a good chance of being one.

Subtrope of Phlebotinum. Has nothing to do with The Artifact.