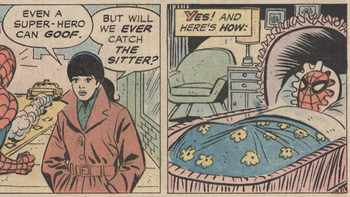 Just another day in the world of Spidey Super Stories.
Advertisement:

Spidey Super Stories is what happens when you take the kid-friendly, often wacky adventures of Spider-Man from The Electric Company (1971) and turn them into printed material. Several stories were based on segments from the show, but there were many original stories as well, using established Marvel villains and characters. The comic ran from 1974 to 1982.

Spidey Super Stories was made to appeal to younger readers, and is most often remembered for hilarious scenarios, derivative plots, and a slew of original characters, most of whom originated from the TV show. The comic is notable for having the first appearance of a Spider-Woman in any Marvel continuity, with Valerie of the Electric Company taking the role years before Jessica Drew.

Also, this is the series where the infamous Thanoscopter came from.

This is not to be confused with either Spidey or Spidey and His Amazing Friends.