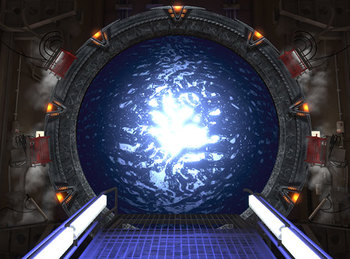 And so the decade of fiddling with unknown alien technology began.
"I discovered recently that the Nobel Prize panel does not disqualify submissions if the scientific advances in question have been stolen from extraterrestrials rather than humans. I estimate that I am now owed at least six of them and would greatly appreciate if you would use these new plasma weapons to keep Stockholm safe until the end of the war."
— Chief Research Officer, Xenonauts

A nifty trick to get some of the traditional Science Fiction capabilities in a show that's set in the present. Rather than growing your own Phlebotinum, just have a passing Sufficiently Advanced Alien dump some on you.

The biggest advantage of using imported phlebotinum is that it allows you to do a Science Fiction story with characters who are more like contemporary humans without begging for too much credulity from the audience. We don't need an enclave of scientists who are way smarter than anyone ought to be, we don't need to have a super-powered masquerade operating in total secrecy, and we don't need to set the show in The Future, speculating what society will look like and probably date ourselves when we get it wrong. John Q. Ordinary guy just gets some uber-technology from another world dropped in his lap.

Allows for even more Phlebotinum Breakdown than usual, since our heroes often have only a passing understanding of how it works.

You can also fuse your Imported Alien Phlebotinum with the home-grown variety to produce hybrid devices which do wacky things. The process of contriving such devices leads to a good MacGyver-style plot.

Additionally, we get a reasonable explanation for No Plans, No Prototype, No Backup and Disposable Superhero Maker if the phlebotinum is something that can't be reproduced with Earth technology.

Sometimes the aliens do this on purpose, to lend us humans a helping hand. Sometimes, it's an accident. In the latter case, they might show up later and want it back. Violently.

Does not cover natural resources which are extra-terrestrial in origin, such as super-alloys from meteors; those are Green Rocks.

If the technology is not fully understood then it's an example of the Black Box.

On the other hand, if we manage to reverse-engineer it to the point of making it part of everyday technology, then E.T. Gave Us Wi-Fi is in effect.

See also Lost Technology, which is inherited from advanced beings of the same planet, but a different time.

See Spice of Life when it is an edible resource with some use in space.