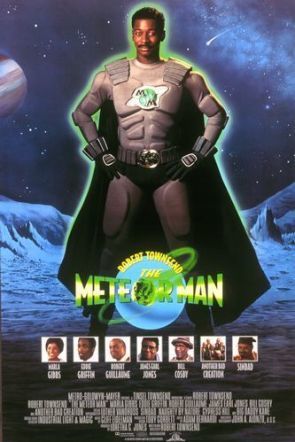 The Meteor Man is a 1993 Superhero movie, starring Robert Townsend alongside an Ensemble Cast ranging from well known black actors and comedies such as Marla Gibbs, James Earl Jones, Robert Guillaume, Sinbad and even Bill Cosby himself, to up-and-coming black actors such as Don Cheadle, Tom Lister Jr. and Eddie Griffin. Townsend also wrote and directed it, just as he did with his previous film, The Five Heartbeats. Although neither film fared very well at the box office, they both are considered cult classics to African-American viewers like most of his work.
Advertisement:

Jefferson Reed is a mild-mannered schoolteacher in a neighborhood terrorized by gang activity. Jeff tries to help a woman who is being mugged by two kids who are apparently trying to get into the Golden Lords, the most powerful of the local criminal gangs and which has member groups even amongst toddlers (Termed "Baby Lords"). The woman flees but the entire gang shows up and proceeds to chase Jeff. He hides in a dumpster for hours. After leaving the dumpster, he spots a falling meteor and tries to run away. But his life is changed dramatically when he awakes in the hospital and realizes the effects of the meteor gave him a number of different superpowers. He decides to don a superhero identity, Meteor Man, and to use his powers to fight crime.