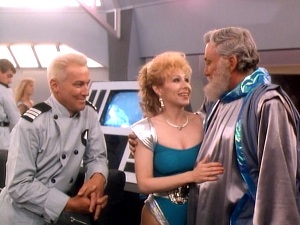 In the future, swimsuits with shoulder pads and shiny pyjamas shall display your wealth and status.
"Captain, get out your spandex suit. We're sending you on a space journey."
— Spore
Advertisement:

There are a few types of clothes people wear when they are traveling in space:

Used Future settings avert this with jumpsuits and coveralls with lots of pockets. Today, Space Clothes are largely a thing of the past in TV and film (though not so much in comics or animation) as everyone goes military-style or contemporary. From an out of universe production standpoint, avoiding space clothes can serve as a method of dodging the Sci Fi Ghetto trap. The problem with this is that people may well not wear those sorts of things in the future and aliens certainly wouldn't.

Additionally, the fashion trends have clearly been showing a pattern towards embracing old school, classic, back to our roots, and retro or even Retraux styles. This is probably due to a general notion that the future is no longer a bright and promising place. Many escape to the perceived coolness of the past. This might explain why Fedoras came back in style amongst hipsters.

Not to be confused with clothes that have starfields and nebulas and other astronomical designs on them; that's Star-Spangled Spandex.