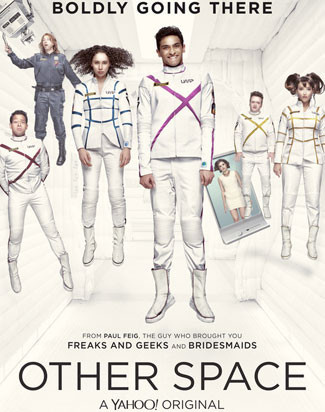 Left to right: Mike, Zalian (holding hands with A.R.T.), Karen, Stewart, Natasha, Kent, and Tina.
Stewart: We all went to the academy because we loved outer space. We wanted adventure. Well, guess what? We're in a whole other space!
Advertisement:

The year is 2105. Fifty years ago, an international coalition founded the Universal Mapping Project (UMP) to chart the cosmos and hopefully find alien life. Unfortunately, over the course of those fifty years, UMP's found basically nothing of interest to the public and its popularity is waning. It's in this climate that young cadet and exploration fanboy Stewart Lipinski is given command of the UMP Cruiser, much to the chagrin of his second-in-command and older sister, Karen, with whom he has a somewhat friendly (and other times, not so friendly) rivalry. Stewart is happy-go-lucky and a major people-pleaser, while Karen is stern and authoritarian.

Also along for the ride are:

Unfortunately, about a minute into their first mission—already looking to be a disaster as the ship is breaking and they're light on supplies—they find themselves sucked into a wormhole to another dimension. Now this barely-qualified crew must ward off alien attackers and space anomalies as they try to find a way home.

The show stars Neil Casey, Eugene Cordero, Conor Leslie, Bess Rous, Karan Soni, and Milana Vayntrub alongside Mystery Science Theater 3000 alumni Trace Beaulieu and Joel Hodgson. A year after the first season premiered in 2015, Yahoo! Screen was shut down, preventing the series from being renewed for a second season. Feig has since made attempts to revive the series, with the first season eventually being picked up by streaming service DUST in 2020.

Other Space contains examples of: