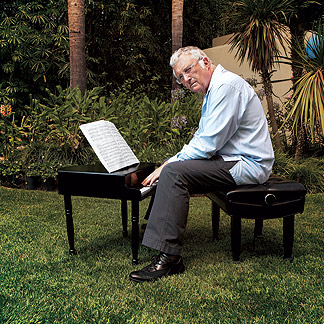 ), Randall Stuart "Randy" Newman (born November 28, 1943) is arguably the most famous member of the Newman musical family headed by his uncle Alfred, but one who's noted more for his songwriting skills than for his film music. Born in Los Angeles but raised in New Orleans, Randy was a talented pianist from an early age, and always seemed destined for a career in music, but during his formative years purposefully stayed away from Hollywood and concentrated on being a recording artist in his own right.

With his regular collaborator Lenny Waronker, Newman recorded and released many popular hit records, including "I Love L.A.", "Short People", "Political Science", "Marie", "I Think It's Going To Rain Today", "You Can Leave Your Hat On" (for which he is the Trope Namer), and the controversial "Rednecks". His solo albums (Randy Newman, 12 Songs, Sail Away, Good Old Boys, Little Criminals, Born Again, Trouble in Paradise, Land of Dreams, Faust, Bad Love, Harps and Angels, and Dark Matter), have all received critical acclaim for the way in which his sardonic, witty lyrics and totally unique vocal delivery allowed his songs to be entertaining, musically excellent, but yet remain politically and socially aware.

Newman is generally considered to be among the greatest living American songwriters, with a legion of dedicated followers. After contributing music to the 1971 movie Cold Turkey, Newman formally entered the film music fray in 1981 with the score for Miloš Forman's Ragtime, for which he received the first of his 20 Oscar nominations. Since then, Newman's film music output has been small but of consistently high quality, and has included works such as:

Most of these scores in the list were Oscar nominated for either the score or one of his brilliant songs. He finally won his first Oscar, in 2001, for the song "If I Didn't Have You" from Monsters, Inc. He won his second Oscar in 2011, for the song, "We Belong Together" from Toy Story 3.

In 2003, he wrote and sung the Emmy Award-winning theme song for Monk, used from its second season onwards, titled "It's a Jungle Out There". In 2009, he returned to write and sing the closing song to the entire series, "When I'm Gone", and won an Emmy for that too.

Ever the innovator, Newman's was involved with the South Coast Repertory Theater's production of "The Education of Randy Newman", a musical stage play based on Newman's life set to his songs. The play, which stars Scott Waara as Newman and is directed by Myron Johnson, premiered in Costa Mesa, Los Angeles on 2 June 2000. The Randy Newman Songbook, Vol. I (2003), his first effort for Nonesuch, introduces powerful new solo versions of early classics and recent gems alike. The eighteen songs are an intimate and powerful reminder of the enduring work that Newman has established. In 2008, he released Harps and Angels for Nonesuch Records. His first collection of new songs since 2009's Bad Love.

He has earned two more Academy Award nominations (19 total) in the Best Original Song category for "Almost There" and "Down in New Orleans". On June 2, 2010 Newman received a star on the Hollywood Walk of Fame.

His career as a film composer is so varied that he has several pages dedicated to his work: His scores for John Lasseter and Pixar films, his amazing music in The Princess and the Frog, and his own works in other films.