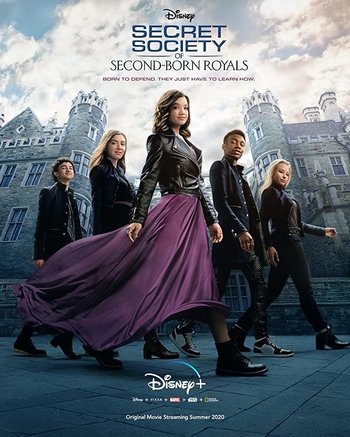 Born to defend. They just have to learn how.
Advertisement:

The film follows Sam, a teenage royal rebel second in line to the throne of the kingdom of Illyria. After a mishap at a concert lands her in trouble she's sent to what she is told will be summer school - but is actually a training academy for other second born royals like herself, all of whom discover they have super-human abilities. Over the summer they will train to master their skills; if successful, they will be invited to join the Society (a worldwide organization of royal superhuman second-born operatives charged with keeping the world safe). If they wash out... the Society will have their memories of their training erased and their powers permanently removed.

As the kids stumble through their training and Sam tries to balance out everything in her life (the coronation of her sister Elanor and their sister issues, her training and her best friend, who thinks her royal duties are pulling them apart)... a major threat to the Society, Sam's family and the world appears - a threat out of Sam's past. It's up to the cadets to master their powers, their personal problems and learn how to work together as a team, in time to stop that threat from destroying everything they hold dear... including their own families.

Secret Society of Second Born Royals has examples of: