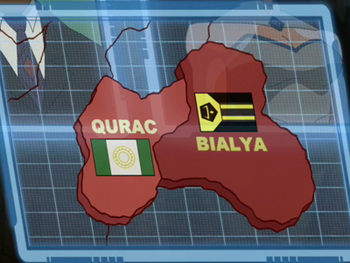 A fictional country in an otherwise real-world setting. May be a Fictional Counterpart to a Real Life country, or may be created whole-cloth as a example of a generic political/religious ideology (e.g. a Commie Land that is not readily identifiable with any of the various, often mutually-exclusive forms of Communism or any specific Communist/Socialist state), and/or with no direct resemblence to any specific Real Life country.

May overlap with Commie Land, Darkest Africa, Divided States of America (if [some of] the seceding states unite into a new one that is separate from the others and is not a successor to the original United States), United Europe, Lady Land (if set in a real-world setting, and especially if it's founded by the Amazons of Greek Mythology), One Nation Under Copyright (in Mega-Corp–dominated settings).

See also Fictional Province and Fictional Earth. Compare with No Communities Were Harmed. See also City with No Name when the setting is not named at all.