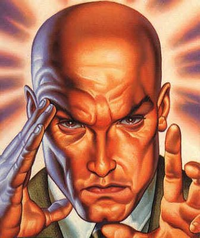 "They believe that I can
Raise a finger to my head
See the past, read a mind
And can mingle with the dead."
— Shawn Spencer, Psych, "Psych: The Musical"
Advertisement:

Whenever someone uses their Psychic Powers, they put a hand up to their head, most traditionally with the middle and fore fingers on the brow and thumb on or very near the jaw. If they're doing something really hard, it takes both hands on their temples. If it's something really difficult, they have to use both hands — and quiver, and maybe bleed from the nose.

This is a type of Magical Gesture. Healing Hands is a similar standard-gesture power. Not to be confused with the Face Palm. Compare Blasting Time. Compare and contrast Gotta Get Your Head Together, which generally happens to a person on the receiving end of Psychic Powers.