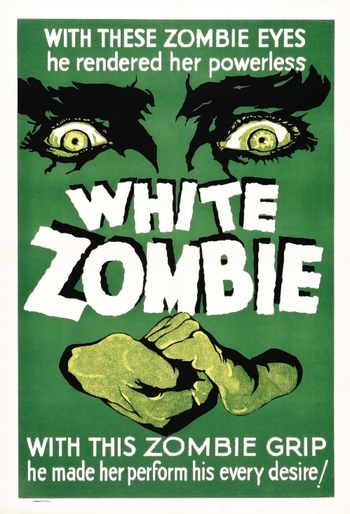 Neil Parker: Who are you? And what are they?
Legendre: For you, my friend, they are the angels of death.
Advertisement:

White Zombie is a 1932 horror film directed by Victor Halperin and starring Bela Lugosi. Based on the 1929 novel The Magic Island by William Seabrook, this was the first film to bring zombies into the silver screen, predating Night of the Living Dead by 36 years.

Not happy that Madeline (Madge Bellamy), the woman he loves, is marrying someone else, Haitian plantation owner Charles Beaumont (Robert Fraser) turns to a local witch doctor named Legendre (Lugosi) to have things his way. Legendre uses his skills to turn the woman into a zombie, who is mistaken to be properly dead. After she is whisked away from her grave, her husband Neil Parker (John Harron) learns the truth about her condition and sets out to rescue her.

The film is in the public domain, which means one can easily find it either online or as part of almost any movie box set containing public domain movies, though the versions found through said methods are of questionable quality. It was released on Blu-Ray and DVD by Kino (their release contains both a heavily DNR-ladened version of the movie and an uncleaned version) and VCI Entertainment (their release has a version which falls in between).

James Rolfe highlighted the movie on Monster Madness 2009, and eventually did a three-part commentary on it with Mike Mattei.

In 1936, it was followed by a loose sequel, Revolt of the Zombies.

Not to be confused with the band White Zombie, though this is where they got the name from.