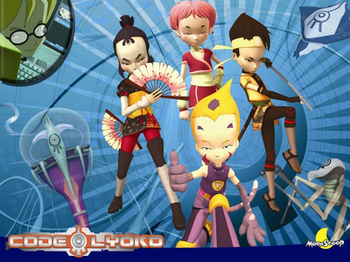 "Code Lyoko, we'll reset it all
Code Lyoko, be there when you call
Code Lyoko, we will stand real tall
Code Lyoko, stronger after all!"
"Can you keep a secret?"
Here we are, going far to save all that we love
If we give all we've got, we will make it through
Here we are, like a star, shining bright on your world...
Today!
MAKE EVIL GO AWAY!
- "A World Without Danger" (English version), composed by Franck Keller and Ygal Amar and sung by Noam
Advertisement:

Code Lyoko is an Animesque show that was written and produced in France in English and French for simultaneous release in its home nation as well as the US — and about 160 other countries.

It follows the adventures of a group of teenage students at a Boarding School who discover a supercomputer in the basement of a nearby abandoned factory. The computer has modules that allow people from the real world to "virtualize" into the Cyberspace of Lyoko, where an evil A.I. named XANA is apparently hunting down a pink-haired girl named Aelita. The computer also has the ability to effect a temporal recursion (in Layman's Terms, rewind time) up to 24 hours in the real world. The show's primary aesthetic hook was that scenes in the real world are depicted in 2D animation, while scenes on Lyoko are depicted with CGI.

XANA manifests in Lyoko indirectly through a variety of monsters with various attacks and tactics, trying to capture Aelita and repulse her protectors from the real world. XANA also attacks the real world, which at first resembles the results of The Cracker, doing damage through various interfaces, but these attacks slowly gain a supernatural edge, including summoning monsters in the real world, and possession of students and teachers.

The students often use the Return to the Past function to repair damage and effect a kind of Masquerade to protect Aelita, however with the knowledge that death is permanent -- not even time travel will bring them back.

The five main characters (Aelita and her protectors) are occasionally referred to as "The Lyoko Warriors" or Team Lyoko. See the character sheet for individual descriptions.

The episode recaps of all the episodes can be found here.

The entire show is officially available on YouTube in both English

as well as being added to most regional versions of Netflix on 1st October, 2020 (in widescreen, and in better quality).

There is a short (5 minutes long) film made in 2001 by the creators of the show, Garage Kids,

that is considered a test pilot for the series. It introduces the main characters and some future elements of Code Lyoko, though there are differences both visually and plot-wise. Code Lyoko began broadcast in France in 2003 on France 3 and Canal J, and in the United States in 2004 on Cartoon Network. The TV series ended in 2007 after four seasons and 97 episodes (including a two-parter prequel).

In the summer of 2011, a new twenty-six episode series was confirmed to be in production, titled Code Lyoko: Evolution, and it was released in fall the following year. Evolution is a continuation of the original show, with live-action replacing the 2D segments. All tropes relating to this series should go on its page.

Between the two TV series, a novel series was produced by Atlantyca Entertainment. The series, originally written in Italian, takes place in a heavily expanded Alternate Continuity which promises to tie up some of the plot threads left hanging by the show. The series is officially available in 11 languages, not including English. However, an English fan-translation of the series is available for download here.

The series includes the following books:

A Code Lyoko stage show was also produced and performed in Spain in March of 2011.

open/close all folders
Tropes # to E
Tropes F to J
Tropes K to N
Tropes O to S
Tropes T to Z
Tropes in Garage Kids
Tropes in the video games
Tropes in the novel series
Return to the trope now!
Feedback

Example of:
Beware the Silly Ones