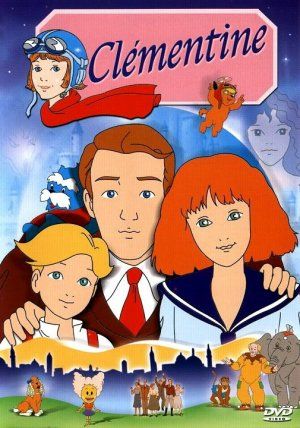 Clémentine is an animated series from the 1980s co-produced by French and Japanese studios.

Clémentine Dumat is the 10-year-old daughter of a French aviator and former World War I Ace Pilot, Alex Dumat. She becomes a wheelchair user following an airplane accident caused by the demonic entity Malmoth, who seeks to capture her soul and make her his plaything. As she travels the world with her father and younger brother Petit-Boy, looking for a cure that will restore the use of her legs, she meets famous figures from legend and literature in her dreams, and with the help of the fairy Hemera, foils Malmoth's evil schemes in both the dreaming and waking worlds.

Created by Bruno René Huchez, Clémentine was inspired both by Huchez' love of Anime - he was one of the producers responsible for bringing anime dubs to French television - and by his own childhood, as his mother used to tell him stories about a young girl and her fantastic journeys when he was ill. The first and best-loved season, 26 episodes long, featured Clémentine's adventures in various literary, legendary and historical settings, accompanied by Hemera and her pet kitten, Hélice.

A second season was based more on contemporary (1920s) figures, but its weaker plot line and the poor quality of the artwork made it significantly less memorable.

A rumored live-action film has been rotting in Development Hell for years. It apparently would have been a Turkish/American co-production.