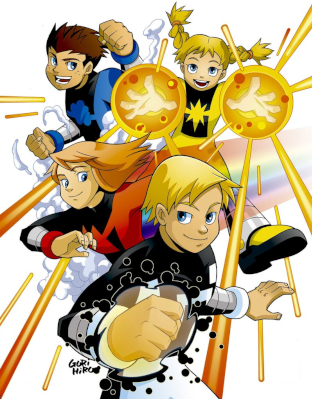 Real superheroes... only smaller.
"I don't, I don't, uh, think crime fighting takes any specific age... OK, I mean, even babies could save the day if they had to."
— Craig McCracken, interviewed on Space Ghost Coast to Coast
Advertisement:

They'll fight off hordes of monsters with techniques the likes of which master swordsmen would never equal. They'll wield weapons spoken of only in the oldest of legends. They'll Save the World and everyone in it from destruction five times over.

And they'll do all of this while not even being old enough to drive.

Your standard Kid Hero has a strong streak of immaturity in them. They might well regard the adventure as a game, albeit one with slightly higher stakes. And if they aren't savvy to the world yet, expect them to be blown away by everything they see. Expect this to be scrubbed out of them in short order, usually when they finally meet an antagonist capable of matching their skill.

Kid Heroes DO have some things going for them, though: their idealism and youth. Anyone trying to perform a Breaking Speech on a Kid Hero is in for a rude awakening when they get it thrown back in their face. Kid Heroes, quite simply, have a very clear view of right or wrong. Some may call it naïve, but it serves them well, as they are basically impossible to corrupt. They're also at that age where their self-image is intricately intertwined with their friends, so they often kick ass through The Power of Friendship.

A Kid Hero will commonly, but not universally, have two primary adversaries; their most dangerous opponent is usually an adult villain who serves as the hero's Arch-Enemy, while their second most dangerous opponent will usually be a younger antagonist, closer to their own age or slightly older, who serves as the The Rival or Evil Counterpart of the hero. These two are rarely affiliated, but if they do work together, the adult will almost certainly be the Big Bad with the younger character as an extremely reluctant and rebellious Dragon.

Most commonly seen in console and computer role-playing games, as it allows for character growth to feel natural and skips the question of why they aren't properly equipped for the job. Also appears in the vast majority of animated action-adventure, both Western and Eastern.

If a television show is specifically focused on this character, then the description will most likely be along the lines of "Saving the world, and doing homework!"

If particularly well executed, The Brigadier and others won't look like monsters or weaklings for sending a kid to do their heroics for them. This is Older Than Feudalism; examples include the Biblical hero David, and several Greek and Hindu mythic heroes (e.g., Hercules, who killed two large snakes sent by Hera to kill him in his crib).

See also Child Soldiers, the darker form of this trope. This can easily overlap with the Kid-Appeal Character - kids like to see fellow kids like them save the day, after all. Compare Kid Samurai. Contrast Enfant Terrible, Kids Are Cruel, and Teens Are Monsters. Naturally a requirement for Kid Hero All Grown Up.

Despite being de-aged into children, the ToQgers can still kick as much ass as the adult Kyoryugers can.

Despite being de-aged into children, the ToQgers can still kick as much ass as the adult Kyoryugers can.