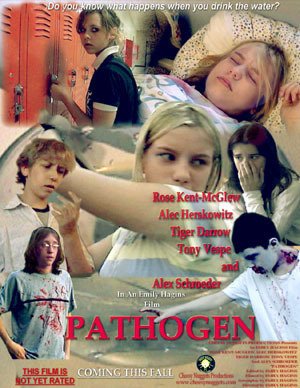 Do you know what happens when you drink the water?
Advertisement:

An infection which appears to be caused by a bacteria in the water turns out to be more. A fourteen-year-old student, Dannie, feels the real cause is linked to her recurring dreams. When the infection reaches an epidemic level, it becomes clear that this infection not only kills, but restores the body to a minimally functioning state where the infected become the "living dead". Dannie and a researcher named Sue may have the key to solving the mysterious illness. The story follows their journey to avoid being infected or attacked before finding a safe place or a cure.

Pathogen is a 2006 independent horror film directed by Emily Hagins.