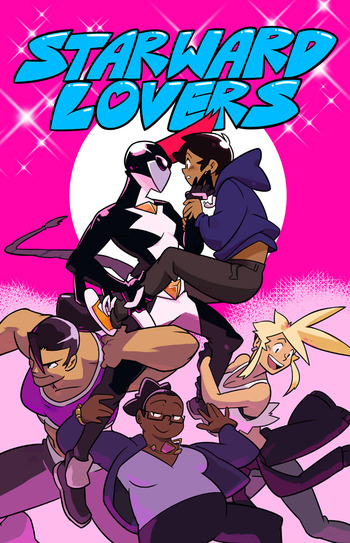 Life is quiet for Jen Gurrera, whose only joy is catching glimpses of her crush, the stoic and mysterious Revonda Red – until she discovers that her flame is an undercover agent protecting the earth from intergalactic fugitives. Jen dives headlong into a world of aliens, deep sea bases, and dazzlingly attractive fellow agents in the hopes that, if she’s lucky, Red could feel the same way…

STARWARD LOVERS is a sci-fi action romance webcomic by Miki Brewster. The comic started in September 2016, and was completed in 2019.note The final page was posted for Patreon subscribers in April, and publicly in August. It can be read online starting here.