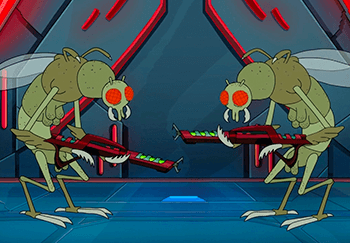 In space, bug zaps you.
It was no accident that they looked insectlike to human beings. Though their internal organs were now much more complex and specialized than any insects, and they had evolved an internal skeleton and shed most of the exoskeleton, their physical structure still echoed their ancestors, who could easily have been very much like Earth's ants. "But don't be fooled by that," said Graff. "It's just as meaningful to say that our ancestors could easily have been very much like squirrels."
— Ender's Game
Advertisement:

You've got Humanoid Aliens, and you've got Starfish Aliens. Somewhere in between are the Insectoid Aliens: aliens modeled after Earth arthropods.

Often, inspiration for this trope comes from "eusocial insects," including many species in the order Hymenoptera (ants, bees, and wasps) and insects in the infraorder Isoptera (termites), who are able to create societies with caste systems and complex habitats similar to that of human cities. Thus often these aliens will invoke Hive Mind, Bee People, Horde of Alien Locusts and a philosophy of We Have Reserves, Zerg Rush and Attack! Attack! Attack!.

Due to What Measure Is a Non-Cute? (and arthropods are specifically known to provoke fear in humans) such aliens are likely to be Always Chaotic Evil, though exceptions do exist. Overlaps with Big Creepy-Crawlies, though this trope deals specifically with extraterrestrial bugs. The Xenomorph Xerox also owes a lot to this trope. A Bug War will often (although not always) feature opponents that actually look like bugs.