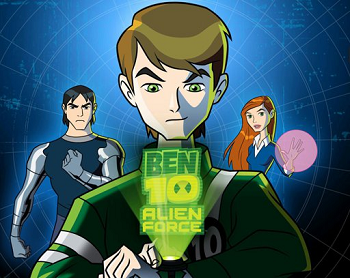 Ben 10: Alien Force was a Sequel Series to Ben 10. Management was taken over from Man of Action Studios by Glen Murakami and Dwayne McDuffie of the Justice League fame.

Ben "10" Tennyson and his cousin Gwen, now both 15, team up with a reformed Kevin Levin, now 16, to stop various evil aliens. Seasons 1 and 2, which were initially one entire season, has them going off against the Nazi-esque Highbreed, who are determined to eliminate all other races, leaving the "one true race". Compared to the original series, those seasons had a darker and more mature approach, as well as less filler and more continuity between the episodes. They also matured Ben into an Older and Wiser, more competent Hero, giving him more control over the Omnitrix and amplifying his Chronic Hero Syndrome to almost Messianic Archetype level.

Season 3 is a bit more loose, involving Vilgax's attempts to finally get his revenge on Ben. This series' Grand Finale set up Alien Force's own sequel series, Ben 10: Ultimate Alien.

This show as a whole is notable for starting a major Broken Base in the Ben 10 fandom: while a lot of fans complained about the often unexplained (or badly explained) changes both in-story and amongst the characters, and remained faithful only to the original series, many others appreciated to see Ben finally getting mature after all the Aesop Amnesia in the original series, as well as the Cerebus Syndrome it led to. It's commonly believed that all of Alien Force was the highlight of the franchise. In the end, Alien Force was popular enough to last three seasons and allow the franchise to go on, spawning a similar sequel before it was decided to try going back to the Original Series' roots with Ben 10: Omniverse.

As with the original series, Alien Force was given a Live-Action Adaptation film Ben 10: Alien Swarm. General consensus is that it's leagues better than the original's Race Against Time whiles others were disappointing at the fewer Hero changes.

Alien X is Ben's most powerful transformation, in his first appearance he repaired a broken dam with a single hand-wave.

Alien X is Ben's most powerful transformation, in his first appearance he repaired a broken dam with a single hand-wave.