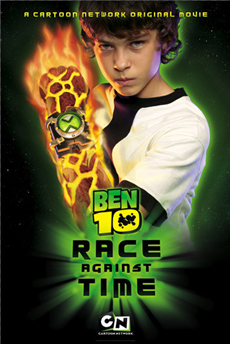 Ben 10: Race Against Time is a 2007 Live-Action Adaptation movie of the original Ben 10 series and the first movie in the series overall.

The movie is set at the end of Ben's summer vacation in which Grandpa Max, Gwen and he are returning home to Bellwood. Naturally Ben's not looking forward to returning to school and his boring old life. But that soon becomes the least of his worries when a mysterious figure named Eon comes looking for him and the Omnitrix. As things progress, secrets are revealed and naturally the fate of the world is at stake.

While the movie isn't considered canon to the series, some elements from it make it to the sequels, such as Ben's parents and Eon (though the latter usually was mostly alternated).