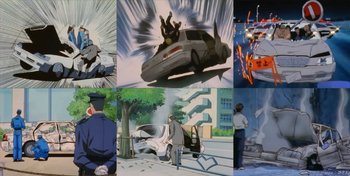 OH, MY CAR!
"What is it with everybody wrecking my car?!"
— Kevin Levin, Ben 10: Alien Force, "Singlehanded"
Advertisement:

This is a car that keeps getting destroyed, mostly in comedic situations. Because Status Quo Is God, and so the joke can continue, it always gets replaced or repaired, often by an exact duplicate to make filming easier.

Alternately (as in the case of many films), the car suffers from repeated accidents (often of increasing severity), until it is finally totaled or rendered inoperable in the end.

Compare The Chew Toy and They Killed Kenny Again, similar concepts that apply to characters rather than their cars. Compare Captain Crash, who is prone to causing this by crashing everything they drive. If the owner opts for the "repair" version of this trope, it may lead to the car becoming The Alleged Car. For added hilarity, try combining it with The Precious, Precious Car or Watch the Paint Job. Contrast Invincible Classic Car.