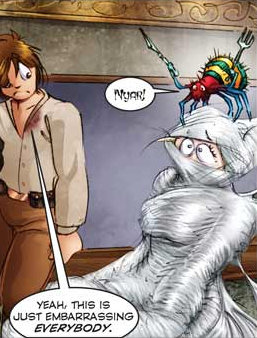 Safe to say, the day didn't really get better for her.
"Spider-Man, Spider-Man, Does whatever a spider can.
Spins a web, any size. Catches thieves, just like flies."
— Spider-Man (1967) Theme Song
Advertisement:

In fiction, there are many creative ways to use a spider web. Mandatory offensive tactic for a Giant Spider or any character with spider-themed powers, its most common application is tying someone head to toe in webbing to prevent escape, and what usually follows is not pretty. The web will typically hang from the ceiling in the way that a spider might wrap a fly in web before drinking its fluids. Special caution is advised while wandering an Enchanted Forest or a Creepy Cave where it commonly happens, as it is extremely rare for a character in such a sticky situation to get rid of it without help.

In Video Games, this trope frequently manifests as lowering whatever speed stat there is, outright forcing a character to wait the effect out to be able to move at all, or both at once depending on the developer.