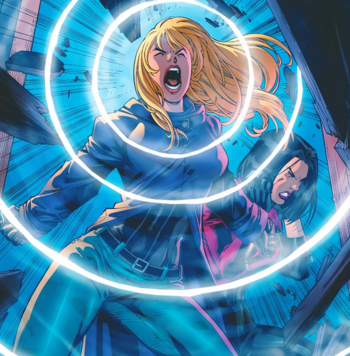 The power of sound. Able to shatter glass, crumble rocks, and knock down buildings. In the world of fiction, anyways. Characters who have super-powerful screams or other sound-based superpowers can usually do something like vocal mimicry, scream out sonic booms, and screech so loud it can paralyze people by making their eardrums bleed.

It's also interesting to note that in Real Life, versions of this power would be Awesome, but Impractical, seeing as a sonic boom would practically level everything in a spherical radius from the hero (including themselves). Comes with an unusually high level of Required Secondary Powers (most importantly, super-resilient eardrums and respiratory tract), and often involves Acceptable Breaks from Reality — a visual that indicates the sound — to depict.

An occasional variation has entirely normal people able to use their voices as a weapon against a bad guy or monster who has loud noises as a Weaksauce Weakness. This is often used to subvert the helplessness and pathos often associated with the Screaming Woman.

Occasionally, characters with this power also have the Compelling Voice ability, if the character has sufficient fine control over it.

Glass-Shattering Sound is a sister trope for sounds that only shatter brittle materials. A non-weapon and adorable example would be Cute, but Cacophonic. Sometimes combined with Razor Wind. Can overlap with Breath Weapon. Compare Make Some Noise, Loud of War, Musical Assassin and the sonic variants of Brown Note. For a related but less lethal weapon trope, see Sonic Stunner. Sound sources other than voices that have a physical effect on people or things are covered by Gale-Force Sound.