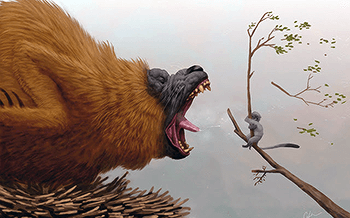 "Go Lions, Brisbane Lions, we'll kick the winning score!
You will hear our mighty roar!"
— Brisbane Lions (to the tune of La Marseillaise)

It's quite simple: Big monsters have big lungs, that let them make big noises. Sometimes little monsters make big noises, too, but that's neither here nor there. When a T. rex, lion, tiger, dragon or some other scary monster appears in a work that contains sound, it will make a mighty, terrifying, awe-inspiring ROOOOAAAAAARRR!!!!

If the creature roars before attacking someone, it's Roar Before Beating. If the roar is unique to that certain creature and hard to confuse with anything else, it is Signature Roar. However, if it's an animal that shouldn't be roaring at all, see Incorrect Animal Noise.