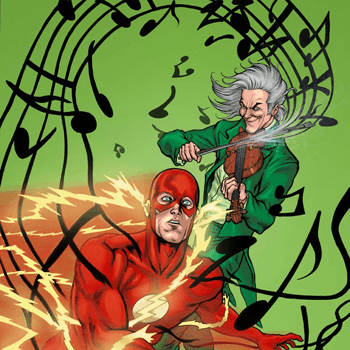 When it comes to annoying the Flash, the Fiddler doesn't fiddle around.
"I remember every little thing as if it happened only yesterday. I was barely seventeen... and I once killed a boy with a Fender guitar. I don't remember if it was a Telecaster or a Stratocaster, but I do remember that it wasn't at all easy. It required the perfect combination of the right power chords and the precise angle from which to strike."
— Jim Steinman, "Wasted Youth"
Advertisement:

Musical assassins are hitmen with style. Who needs guns when you can lay waste to your enemies with a carefully-calculated concerto? Techniques start out at Brown Notes and only get more ridiculous from there. These assassins are especially popular in old Chinese martial arts movies. Advantages of such a combat style include invisible attacks that move at the speed of sound (Duh) which makes it difficult to be blocked by conventional methods like other weaponry. However, this is normally traded off with a high required skill level, especially when it comes to aiming sound waves.

And why stop at Professional Killers? Video games, for one, are rather fond of improbable music-powered weaponry. Note that weapons (like guns) merely disguised as instruments don't count; that's cheating. Neither do instruments that double as weapons or weapons used as instruments.

Sub-Trope of Art Attacker and Weapons of Their Trade.

Compare Magic Music, Disco Tech, The Power of Rock, Make Me Wanna Shout. See also Brown Note, which can be used by a Musical Assassin to cause insanity or death; Dreadful Musician, for musicians who merely make you wish you were dead; and Instrument of Murder, which is used by musicians for physical attacks.

Not to be confused with Assassins, the musical.

Hibiki and the Seven Senki

The Oni from Kamen Rider Hibiki use the ultrasonic vibrations of their music to shatter the Monster of the Week.

Hibiki and the Seven Senki

The Oni from Kamen Rider Hibiki use the ultrasonic vibrations of their music to shatter the Monster of the Week.