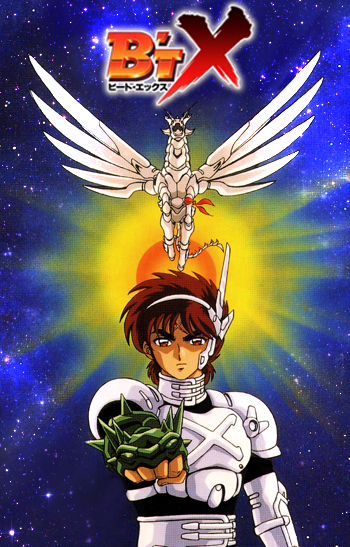 B't X (pronounced "Beat X") is a Super Robot themed Shonen Manga written by Masami Kurumada, published for Kadokawa Shoten's Shonen Ace magazine after he was forced to finish Saint Seiya prematurely due to the insistence of its publisher. B't X has a similar premise but with a different setting and execution, some people considered this as Saint Seiya WITH SCIENCE!!!

Set sometime in the 21st Century note To be precise, somewhere between the 2020s to early 2030s., the story begins with Teppei Takamiya, as he travels to Beijing to attend an international robotics expo to reunite with his brother Kotaro, who's been studying robotics abroad in Berlin and was scheduled to make a presentation within the expo. Not long after Kotaro begins his research presentation about the possibility to create an advanced form of Artificial Intelligence, Kotaro was abducted in public by a Humongous Mecha in the shape of a Queen Ant. Teppei immediately began his chase-down using a gauntlet known as the "Messiah Fist" to hold onto the Queen Ant as it travels to a secretive base within the Gobi Desert, which was revealed as their Empire's headquarters.

Getting thrown into a garbage heap and facing a cyborg he somehow was familiar with, Teppei's blood awakens a relic from the past; a B't known only as "X," who was considered the most powerful B't in existence. Both are equally stubborn, although quite different in many ways, and after a few initial squabbles, X resolves to help Teppei in his quest to save his brother.

Along the way, we find out quite a bit about Teppei's past, the reasons Kotaro was kidnapped, and the Machine Empire's plans involving a home-grown monster of Devil Gundam proportions.

The manga ran in Shonen Ace from December of 1994, to February of 2000; with its anime adaptation released in year 1996. The manga was once licensed by TOKYOPOP in North America, and the anime was licensed and partially dubbed (with questionable quality) by Illumitoon Entertainment and has recently been rescue licensed by Anime Midstream

, who have redubbed the series from scratch.