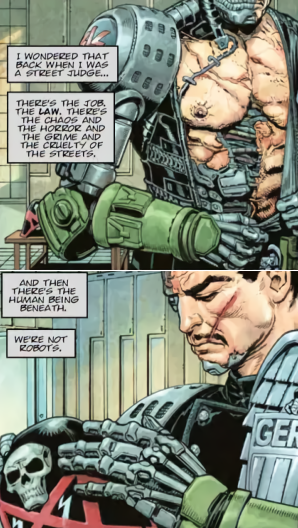 In many popular cyberpunk Tabletop Games, cybernetic implants cause "humanity loss", reducing your social traits and essentially making cyberware into a form of Body Horror. Too many implants may reduce your character to catatonia or (far more often) Ax-Crazy on steroids. If these settings also feature Psychic Powers or Functional Magic, cyberware often reduces your ability to use those as well. This trope usually accompanies the broken lesson that only cyberware inflicts humanity loss — sure, getting that Arm Cannon will dehumanize you, but not deliberately committing actual atrocities, getting hooked on hard drugs, learning Black Magic, having a mental illness that is not fictional, or other expected sources of insanity. It is also a Broken Aesop when Ridiculously Human Robots are depicted as more... um... human.

It does of course make a huge logical difference whether it is just limbs and other body parts being replaced, or if sections of the brain itself are being replaced with equipment which may perform inferiorly to, or merely differently from the original. Replacing parts of your uniquely balanced glandular/hormonal system with pumps might not do your personality any favors, either. And that's without even touching on subtleties like how your intestinal flora affect your mind. Characters who are getting encased in a mobile life support coffin usually suffer this not from having parts replaced, but being put in large, scary and clumsy or destructive bodies.

This trope can be considered a form of Competitive Balance gone bad, as game designers originally used humanity loss to keep player cyborgs in line — without any drawbacks, any Munchkin worth his salt would load himself down with Kill-O-Matic 3000s slaved to his neural systems so he could kill with a thought while his brand new shiny titanium limbs ripped battleships in half. In practice, this wasn't a good balancing mechanism; to a true Munchkin, having your character become a drooling Ax-Crazy psychopath only made it easier to justify all that senseless carnage. It's also notable that this trope happened in few (if any) of the original Cyberpunk novels that inspired most of these games.

Of course, if the cyborg was dead prior to the cybernetics being installed, and it is mentioned that parts being reactivated have side-effects or don't work like the original, this is a case of Came Back Wrong.

In works of fiction, the "humanity loss" is often shown by the character turning evil, becoming emotionless or "hollow", or possibly even losing their memories.

Often the idea behind Dark Lord on Life Support. Compare with Magic Versus Science, Science Is Bad, Pro-Human Transhuman and The Mind Is a Plaything of the Body. Frequently the fate or concern of a Full-Conversion Cyborg See also Psycho Serum, Body Horror, Transhuman Treachery and Our Souls Are Different. If the "humanity loss" from cybernetics is seen as something desirable, see Machine Worship. See also Creative Sterility.