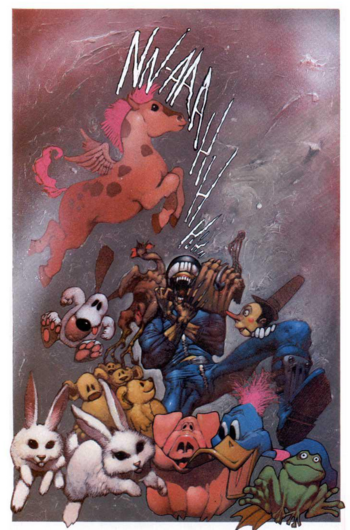 The horror!
"Oh, you couldn't begin to imagine the depths of my suffering there. I spent most of my days strung up like a damned pupating moth trapped over a field of delicate little flowers where angels, fairies, and enchanted stuffed animals lived. They played songs and danced asinine jigs as if their only care in life was when they would get their next warm, fuzzy hug! Instead of ruling the universe with an iron fist, I was serenaded by teddy bears!"
— Frieza, Dragon Ball Z: Resurrection ‘F’
Advertisement:

There are many shorthands to show just how evil bad guys are; they may take great pleasure in their evil actions, do their plotting in not very lit areas, strive To Create a Playground for Evil, adorn their costumes with skulls and bones and put wicked cool spikes on everything including their weapons, their Booby Traps, their toasters, etc.

When you have such characters who seem to live and breathe evil in the edgiest, most on-the-nose manner to the point of having a Bad is Good and Good is Bad mentality, it's only appropiate to have them steer clear of everything remotely "good" as if it were toxic waste. And what's funnier than the image of someone like Lord Murderskull gagging at the sight of a Sugar Bowl the same way a kid reacts towards broccoli?

Anything that comes across as adorable or saccharine, such as sunshine, lollipops, rainbows, puppies, and everything else that comes out of a Sugar Bowl can be expected to provoke a wide range of negative reactions from many Obviously Evil villains, Jerkasses (often the card-carrying kind), and cynics. Edgy, spike-wearing fiends usually harbor intense hatred towards the saccharine, and will not hesitate to grab a bat and beat a sack of kittens to death on sight, or at the very least make their lives miserable with dreaded finger pokes of evil. Sometimes, they may initially look charmed by said sack of kittens... right before bringing down the bat.

In other cases, villains may find cuteness just as completely revolting as people would normally find canned cheeseburger to be, (Yes, canned cheeseburger exists, and we suggest you don't Google images of it for the sake of your sanity and stomach contents) or even have a crippling phobia of it, running away screaming like they just saw a tarantula skittering towards them. For those unfortunate enough to live in a Sugar Bowl, whether out of circumstance or as a Cool and Unusual Punishment, such an Ironic Hell can completely drive them into insanity. While this trope is generally Played for Laughs, serious examples of this trope may lead to a Sugar Apocalypse in an attempt by the villain to turn the place into something more palatable, such as a Crapsack World.

This trope tends to go hand-in-hand with Kick the Dog when establishing how evil a bad guy is; everyone knows puppies make people happy, which makes them Evil's favorite critters to squish in front of horrified onlookers, because Evil hates seeing people happy more than it hates puppies, And That's Terrible.

Among other reasons for bad guys' general aversion towards the saccharine: Evil Is Cool, so anything cute threatens to undermine the villain's cool, villainous appearance and make them look lame. The variety who consider being "evil" a part of their identity, especially these guys, will do everything in their power to prevent this, and deviating from their ways by falling under the influence of cuteness may lead to being told, "If You're So Evil, Eat This Kitten!".

Sub-Trope of Bad is Good and Good is Bad, and a common characteristic of Cartoonish Supervillainy. If the "cute" is directly weaponized to fight evil, see Care-Bear Stare and Super Cute Superpowers. If evil is repulsed merely by the presence of cute, see Allergic To Good and Too Spicy for Yog-Sothoth. If something is so saccharine that even non-evil characters are sickened by it, see Sickeningly Sweet.