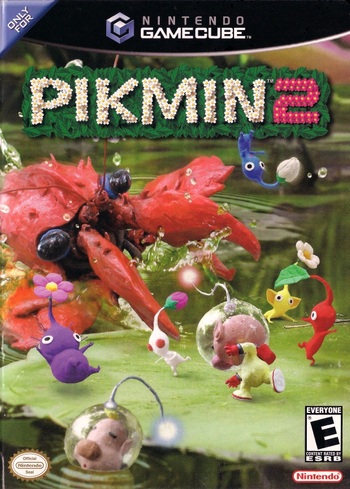 Following the events of the first game, Olimar returns to Hocotate to find Hocotate Freight up to its eyeballs in debt and inches from bankruptcy. As luck would have it, however, the bottlecap he brought back from the Pikmin's planet turns out to be worth a considerable amount of money and, to save the company, he's sent back to the planet in search of the rare treasures it's now known to hold, alongside the junior employee Luie and a sapient ship.

The game features a number of changes from its predecessor. The object-collecting mechanic is expended upon; instead of thirty ship parts, Olimar and his team must track down a total of two hundred and one treasures. The player also has access to multiple captains — first Olimar and Luie, and later the President of Hocotate Freight — which additionally allowed the game to feature a multiplayer mode. Three additional types of Pikmin are also added to the game — heavy, strong and slow Purple Pikmin; White Pikmin who are immune to poison, toxic themselves and swift diggers; and the rare Bulbmin who are immune to all elemental hazards.

Pikmin 2 soon became even more critically acclaimed than its predecessor, gaining rave reviews for its improved length, reliability, clever challenges, and unique style. Despite this, however, the series hit a snag here and went on a hiatus with only the vaguest clues that it was still around, with Miyamoto giving rather vague hints to a third game in the series, broken only the release of a Wii port in 2009. This state lasted for nine years before Pikmin 3 was revealed at E3 2011.