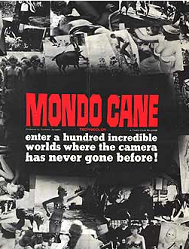 One of the innumerable subgenres of grindhouse and exploitation cinema existing during the 60s, 70s and 80s hoping to rake in cash from adolescent boys out to see gore, sex and sensational subject matter; Mondo films, also called "Shockumentaries", were documentaries which charted the darker side of societies and cultures around the world;... ritual circumcision among African tribes... back-alley tattoo parlors in inner-city America... transgender sex workers in Bangkok... all the stuff they won't show on the Discovery Channel but which can be defended by crying, "But it's really happening".
Advertisement:

This subgenre began with Paolo Cavara's, Gualtiero Jacopetti's, and Franco Prosperi's Mondo Cane, from which the subgenre takes its name and of which subsequent films utilized the word to identify themselves as being in the subgenre. With the English translation of the film's title being A Dog's Worldnote as in "the world is a (mean) dog", not "the world is made for dogs", the film was predominantly an exploration of unusual cultural practices in Africa and Asia, such as a cannibal tribe in Africa with ritualistic boar clubbing and a practicing South Pacific cargo cult. Europe and America had their share of weird behavior represented, too, such as inbred Italians and a restaurant in New York where posh patrons dine on insects. For a time subsequent Mondo films would adhere to this premise. In the 80s the films dropped unusual cultural practices as subject-matter and began to focus exclusively on gruesome ways in which people and animals can die, with such films sometimes regarded as being in a sub-subgenre called "Death Films". Another offshoot common in The '60s was documentaries about strippers and other excuses for women to be topless.

More often than not, the legitimacy of these films as documentaries was limited. Rarely did the filmmakers do the research; content was exaggerated and sensationalized in hopes of fulfilling the films' primary purpose of drawing as large a box office return as possible. Though the films would boast of featuring authentic footage, the greater majority of what was in them was in fact staged. The aforementioned death films loved to boast of featuring authentic killings; but it is common knowledge that never, in the history of cinema, has an actual human being been deliberately killed for purposes of film (not counting literal Snuff Films that only exist on the Dark Web). The animal killings, on the other hand...

Sensationalist documentaries existed (thought not in a proper "mondo" format) before Mondo Cane. In fact, one of Thomas Edison's early films was the electrocution of an elephant, making this trope Older Than Television.

Anyways, aside from the aforementioned Mondo Cane, here are some titles belonging to the Mondo subgenre, with English translations in brackets where appropriate:

Oddly, John Waters' Mondo Trasho is not actually a Mondo film. Also not to be confused with Mondo Medicals or Mondo Agency.

A decent list (with mini-reviews) can be found here

Also, the term became part of late 1980s slang, so expect this term to often show up in the context of Totally Radical instead of referencing this genre.