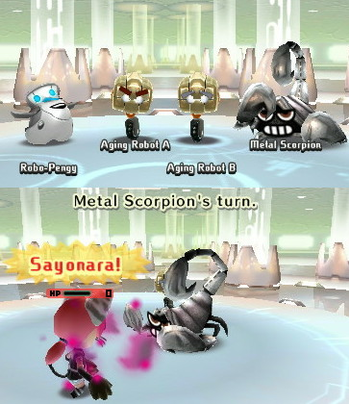 Palutena: Uh-oh, there's an Orne around you, Pit.
Pit: Are you talking about the floating skull?
Palutena: Yes, the slightest touch from one of those will annihilate you.
Pit: That sounds painful. Not to mention totally unfair!
— Kid Icarus: Uprising
Advertisement:

In Video Games, The Big Bad will deploy many different kinds of Mooks across the land to stop The Hero. Flying mooks, underwater mooks, clobbering mooks, advanced mooks, etc. Usually though, the player can afford a couple of mistakes when fighting them. Getting hit just a few times won't often cause a Critical Existence Failure...

...which is why these enemies are particularly shocking.

Instakill Mooks are mooks that can knock the Player Character from full health to 0 in just one blow. Unlike with other mooks, the player can't afford any mistakes. This means the game can go from "doing very well" to "restarting the level" in just a few seconds. For that reason, these enemies are almost always feared by players. Even the Stone Wall crumbles by the wayside against them.

There are three types of Instakill Mook. The first simply deals more damage than a full HP character can take. Smash Mooks can be this to less durable characters.

The second is when an enemy simply instakills no matter how much HP the playable characters have. These will not show damage counters even in games that have them. If they do, it is likely an infinity or a skull symbol, or the phrase "dead" or "killed" will show up.

The third is when there is a One-Hit Kill technique common throughout the game that is known by many different enemies. These enemies and techniques are usually either incredibly holy or dangerously evil. Either way, the technique is often strictly forbidden. Scientific methods of insta-killing are also possible, such as massive lasers and Disintegrator Rays.

When an enemy can one-shot the player simply because of being a higher level, it does not count for this trope. The enemy must be able to end a character of the same level in one blow. Taking on vastly higher-leveled enemies is either a Self-Imposed Challenge, getting completely lost on the map, or just being stupid. Everyone knows that the level 1 character cannot fight the level 30 mooks; everything will instakill it.

When every enemy is this, the player character is a One-Hit-Point Wonder.

Subtrope of One-Hit Kill. Enemies like these are almost always Demonic Spiders. May or may not involve the use of a Suicide Attack, or swallowing the player whole. A fairly common form of Border Patrol. Compare Ledge Bats, which don't instakill by themselves, but rather by making you fall onto Bottomless Pits. Contrast Invincible Minor Minion, the mook that you just can't kill (though the same enemy could very well be both).