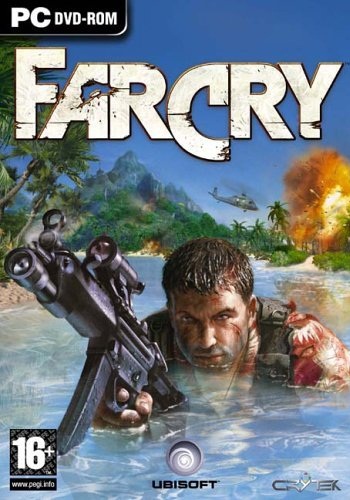 The original Far Cry is a PC game that was perhaps the first of the "next-gen" first-person shooter games from around 2004, exemplified by the likes of Half-Life 2, Doom³, and F.E.A.R. It was released a few months before Doom 3 and Half-Life 2 by the then-unknown developers Crytek, for whom it was their debut title. The game was critically acclaimed for what was at the time truly mind-blowing graphics, wide-open open-ended levels set in lush tropical jungle islands, and advanced enemy A.I.

The basic premise of the game has boat captain Jack Carver, a sarcastic, ill-tempered man in a gaudy Hawaiian T-shirt, having his boat blown up and forced into battling a small army of mercenaries on a series of tropical islands owned by reclusive geneticist Dr. Krieger. After several levels, killer mutants known as Trigens start attacking both Jack and the mercenaries, and it is revealed that Krieger has been working on creating mutants For Science!

The game's popularity spawned a console version, Far Cry Instincts, which was made by Ubisoft instead of Crytek and had the same characters and basic plot premise, but markedly different gameplay, levels, and story. Besides simplified A.I. and graphics and more console-style gameplay, Far Cry Instincts also gave the player character access to special mutant "feral powers" which included regenerating health, super-speed, super-jumps, and super-melee attacks. Far Cry Instincts: Evolution was the sequel to the console version, and switched from fighting mercenaries and mutants in a fictional series of tropical islands to fighting pirates and feral warriors in Indonesia. The story for Evolution has Jack being lured into a gunrunning scheme by half-native Femme Fatale Kade, which ultimately leads to him battling pirates and government soldiers while being hunted by Westerner-hating native warrior Semeru and his tribe of feral warriors, who all possess the same feral powers as Jack.

A console port of the PC version, entitled Far Cry Classic, was released in February 2014, 10 years after the release of the original game. It features updated weapon models (though somewhat inferior texturing, some maps being cut in half with loading zones, and the removal of almost all in-game physics) as well as a number of gameplay updates to bring the game in line with modern shooters, such as the inclusion of a dedicated melee attack and the replacement of the zoom-in mode with iron sight aim. The gameplay balance is also more arcade-like compared to the infamously unforgiving PC version.

There was also The Movie Far Cry made by Uwe Boll. Most notable in that Stuttering Craig and Handsome Tom of ScrewAttack are in it (though not in the main, cut feature).