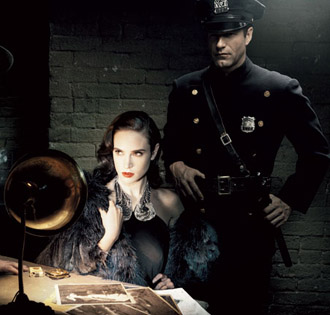 Whatever she did, be glad it wasn't to you.
"They're the kind of dames who can wear floor-length gowns and look completely naked. The kind with hair piled up on their head like compliant serpents, or falling down in smooth lustrous waves. Dames with hard faces and mocking smiles and eyes that sized you up and found you wanting… but you’d do, for now."
— James Lileks, The Bleat for February 7, 2003

First, she turns you on. Then, she turns on you. The typical client in a Hardboiled Detective story (French for "fatal woman," idiomatically "woman to die for"). You know the type. Dressed all in black with legs up to here and shady motives, she slinks into the PI's office, sometimes holding a cigarette on a long, long holder, saying "Oh, Mr. Rockhammer, you're the only one who can help me find out who killed my extremely wealthy husband." Did she do it? Do I care? Wait, where'd that saxophone music come from? Whatever her story is, whether she did it or not, she's definitely keeping some secrets.

The Femme Fatale is sexy and she knows it. Made famous by Film Noir and hard-boiled detective stories, she manipulates and confuses The Hero with her undeniable aura of sexiness and danger. Unlike the virginal and sweet Damsel in Distress (or possibly Action Girl), the Femme Fatale exploits with everything she's got to wrap men around her finger. (In some eras, use of make-up is a tell-tale sign.) He knows that she's walking trouble and knows much more about the bad guys than she should, but damn it if he can't resist her feminine wiles.

If the Femme Fatale is vying for the hero's romantic attentions she will likely have a sweeter and purer rival. The hero might decide that she's not worth the trouble she causes, but if he doesn't, then they might become an Outlaw Couple.

While related to The Vamp, the Femme Fatale is not just any seductress; she has a distinct look and feel. The main distinction is how she presents herself. If you know she's dangerous from the start, but she's sexy enough that you don't care, she's likely a Femme Fatale. On a lesser note, the Femme Fatale generally uses sensuality instead of upfront sexual advances. She may imply that you could have sex later, but she'll never promise it, not even say it—that would decrease her air of mystery and power. Her wiles may include apparent helplessness and distress, and appeals to the man's greed, desire for revenge, or gullibility, as well as the implication of possible romance or sexual rewards, while The Vamp more often relies on raunchy sex or the promise of it sometime real soon.

The Femme Fatale is generally villainous, and heroic exceptions—in an artificial context to snare the bad guy—are closer to Heroic Seductress. Frequently, she is a Wild Card, changing sides according to her own desires and goals; she does not often go through a High-Heel–Face Turn. If she's actually a kind-hearted person who puts on this facade just for fun, this is Trickster Girlfriend.

She's often The Chanteuse or the Lady in Red but possibly dressed like everyone else so as to not be Colour-Coded for Your Convenience. The Femme Fatale is one of the female character types that can often be seen wearing High-Class Gloves, especially in conjunction with her sexy evening gowns, and, during the daytime (particularly in old Film Noir movies), is often seen wearing a "fascinator" or "pillbox" hat with a partial- or full-face veil. She's definitely not above using the Kiss of Distraction.

If she can fight too, then she's really going to be trouble.

This item is available from the Trope Co. catalog.

Courtney Gears is a robotic idol singer and machine supremacist that works directly for Dr. Nefarious.

Courtney Gears is a robotic idol singer and machine supremacist that works directly for Dr. Nefarious.