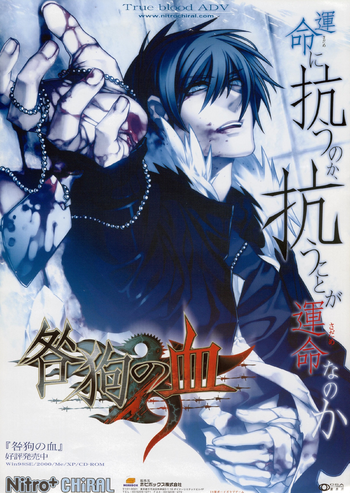 Togainu no Chi (咎狗の血, "Blood of the Reprimanded Dog") is the first Boys Love Game made by Nitro+CHiRAL; it is noteworthy for its violence and dark storyline. It was later ported to the PlayStation 2 under the name Togainu no Chi: True Blood with the adult content taken out and some scenes censored, but containing more endings and a few new characters. One of the several manga adaptations (one which has no Boys' Love content) is available in English from Tokyopop. An official English translation was released in 2020 by JAST USA.

When Akira is accused of murder and sent to jail, he is approached by a mysterious one-armed woman named Emma. Emma has a deal for him; in exchange for his freedom, he will participate in a Blood Sport competition taking place in the city of Toshima called Igura. The rules are simple; collect dog tags from other competitors by beating them in brawls. The one who collects the right tags gets to face off against Il-Re, the supposed undefeated champion of Toshima.

However, things aren't going to be easy for Akira; the people in the Igra are extremely brutal and not above murder in order to get what they want. There are also rumors of a mysterious black-haired man who has been killing off Igra participants seemingly at random, a man who seems to be almost invincible. To top it all, Akira's best friend Keisuke has followed him to Toshima out of worry, and Keisuke is nowhere near ready to take on the dangers of Igra...

An anime adaptation by A-1 Pictures has been aired during the Fall 2010 anime season, the trailer for which can be seen here