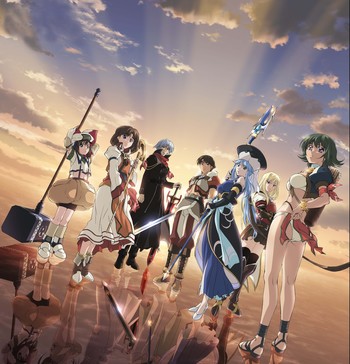 From left to right: Rathty, Rhiannon, Arawn, Arthur, Llyr, Octavia and Morgan.
"Cutting off your own head won't solve anything."
Advertisement:

A PC Visual Novel by Leaf, later re-released for the PlayStation 3 and the PlayStation Portable with art and technical upgrades. An Animated Adaptation was produced by White Fox, which was notably their first work, and aired in Japan as part of the Fall 2009 anime season. The series was licensed in North America by Sentai Filmworks for an English-languge release. A 3 volume manga was also made.

In a fantasy world mixing Arthurian Legend, Celtic Mythology, and Roman history, the "Holy Empire" has taken it upon itself to crush all resistance. Against them is the Demon Lord Arawn (in human form) who inadvertently becomes the leader of a tribe fighting for survival. As such, this is a tale of war, sacrifice and beautiful women.

The sequel Tears to Tiara II: Heir of the Overlord was released on Oct 31, 2013.

This game was from the creators of To Heart, To Heart 2, and Utawarerumono. This has the most similarities to the latter.