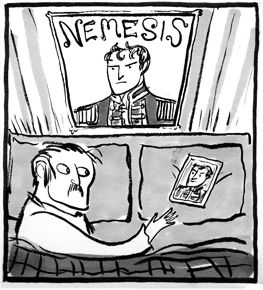 Lying awake at night, thinking about him.
"Venom... I've been all over this city looking for you! You never call, you never write... It's like I'm the only one interested in making this relationship work..."
— Spider-Man: Web of Shadows
Advertisement:

The implications of sexual tension between arch-enemies. Just as Homoerotic Subtext is about the situation of implying romance where even the characters' canonical characterizations or sexual orientations make it implausible, this trope intentionally creates an even deeper paradox by subtextually implying love in a relationship that is, textually, the opposite of love.

This trope is much more likely to come into play if one is The Rival and The Only One Allowed to Defeat You, or a Rival Turned Evil, and is especially likely if one is an Evil Former Friend. If enemies have to work together, it can give the impression that adversity makes strange bedfellows. Other times, this trope can be invoked by a villain who seems to be too eager and persistent about trying to convince or force the hero to rule the world together, and eventually appear as a one-sided Villainous Crush. Terms of Endangerment often feature, and watch out for the "Take That!" Kiss. Dark Magical Girls are often depicted as understanding their Magical Girl counterpart far more than anyone else, and after inevitable redemption at the very least become Heterosexual Life-Partners, if not more.

Since most heroes and their villains tend to be members of the same gender, this results in most examples of Foe Yay overlapping with Ho Yay, but different gender foes qualify too. When it ultimately goes from subtext to text, and the two admit that they love each other, it is called Dating Catwoman. Contrast with Defecting for Love. For the villain who really is sexually obsessed with The Hero, see Stalker with a Crush, Mind Game Ship, In Love with Your Carnage, and Villainous Crush. See also Destructo-Nookie, when they actually do go the whole nine yards.

See also Foe Yay Shipping, for the subjective audience reaction of insisting that after a certain number of such scenes, the two should become a couple (this appeal often lies in the forbidden nature of the relationship, a staple of the shipper diet). Please move non-objective examples to that page. Not to be confused with Faux Yay.